Welcome to
Catholic Diocese of Gorakhpur

Being faithful to Jesus Christ and in fulfillment of His Missionary Mandate for the salvation of humanity, the Eparchy of Gorakhpur shall bear witness to the liberating presence of the compassionate and merciful God and thus facilitate the coming of His Reign in the hearts of all people whom every follower of Christ shall love and serve as children of the same God and hence, as brothers and sisters.

Through personal and communitarian testimony of its ministers, faithful and collaborators, by means of proclamation of the Word of God, Pastoral Care, Works of Charity, Education, Rural development ministry, Healing, Empowerment and Liberation of the marginalized thereby, promoting the creation of a Human Society founded on the values of justice, fraternity and peace.

Patrons of the Diocese

Bishops of the Diocese 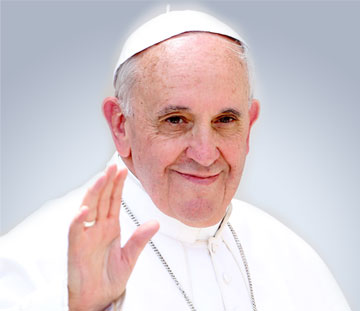 Francis (Latin: Franciscus; Italian: Francesco; born Jorge Mario Bergoglio, 17 December 1936) is the 266th and current Pope of the Catholic Church, in which capacity he is Bishop of Rome and absolute Sovereign of the Vatican City State.

Born in Buenos Aires, Argentina, Bergoglio worked briefly as a chemical technician and nightclub bouncer before entering the seminary. He was ordained a Catholic priest in 1969, and from 1973 to 1979 was Argentina's Provincial Superior of the Society of Jesus. He became the Archbishop of Buenos Aires in 1998, and was created a Cardinal in 2001 by Blessed Pope John Paul II.

Following the resignation of Pope Benedict XVI on 28 February 2013, a papal conclave elected Bergoglio as his successor on 13 March. He chose his papal name in honour of Saint Francis of Assisi. Francis is the first Jesuit Pope, the first Pope from the Americas, the first Pope from the Southern Hemisphere and the first non-European Pope since Pope Gregory III in 741, 1272 years earlier.

Throughout his public life, both as an individual and as a religious leader, Pope Francis has been noted for his humility, his concern for the poor, and his commitment to dialogue as a way to build bridges between people of all backgrounds, beliefs, and faiths. He is known for having a simpler and less formal approach to the papacy, most notably by choosing to reside in the Domus Sanctae Marthae guesthouse rather than the papal apartments of the Apostolic Palace formerly used by his predecessors. In addition, due to both his Jesuitism and Ignatian aesthetic, he is known for favoring simpler vestments void of ornamentation, by starting to refuse the traditional papal mozzetta cape upon his election, choosing silver instead of gold for his piscatory ring, and keeping the same pectoral cross he had when he was cardinal.

Pope Francis has affirmed Catholic doctrine on abortion, contraception, and homosexuality. Whilst maintaining the church's teaching against homosexual acts, he has said that gay people should not be marginalized. As a Cardinal, the Pontiff opposed gay marriage in Argentina. In addition, he maintains that he is a "Son of the Church" regarding loyalty to Church doctrine, and has spoken against abortion as "horrific", insisted that women be valued, not clericized. Summarily, Pope Francis reiterates that "It is absurd to say you follow Jesus Christ, but reject the Church."

Accordingly, he urged Bishop Charles J. Scicluna of Malta to speak out against adoption by same-sex couples, maintained that divorced and re-married Catholics may not receive Holy Communion, and excommunicated a former Catholic priest for Eucharistic sacrilege and heretical views. Furthermore, he emphasized the Christian obligation to assist the poor and the needy in an optimistic tone, as well as promoting peace negotiations and interfaith dialogue.

Popular mainstream media frequently portray Pope Francis either as a progressive papal reformer or with liberal, moderate values. Western news outlets often seek to portray his message with a less-doctrinal tone of papacy in hopes of extrapolating his words to convey a more merciful and tolerant message. In addition, various media outlets indicate, perhaps without basis, that the Pontiff would officially change Catholic doctrine as part of the reform on the Roman Curia. In the news media, both faithful and non-believers often refer to a "honeymoon" phase in which the Pope has changed the tone on Catholic doctrines and supposedly initiated ecclesiastical reform in the Vatican, a position often publicly disputed and negated by Catholic priests and apologists.

Mar George Cardinal Alencherry (Mar Geevarghese Bava) was born on 19 April 1945 in the parish of Thuruthy in the from archdiocese of Changancherry as the sixth child of the ten children of Mr. Philipose and Mary Alencherry of whom two others are priests (Fr. Jose Alencherry and Fr. Francis Alencherry, SDB) and one, a religious sister Sr.Cherupushpam, S.A.B.S.). Geevarghese is his baptismal name. Mar Alencherry had his primary schooling at St Mary's School, Thuruthy and secondary education at St Berchman’s High School, Changanacherry. He began his priestly formation in 1961 at the archdiocesan minor seminary at Parel, Changanacherry. While he pursued his studies in the minor seminary, he obtained his BA in economics with second rank from St Berchman's College. After the minor seminary studies he was sent to St Joseph’s Pontifical Seminary, Aluva where he completed his philosophical and theological studies.

On 18 December 1972 Cardinal Mar Antony Padiyara, the then archbishop of Chanagancherry, ordained him priest at Marthu Mariyam Church, Thuruthy, for the archdiocese of Changanacherry. Later he continued his higher studies at the Pontifical Institute of Theology and Philosophy from where he obtained his master’s degree in first rank. While Mar Alencherry was pursuing higher studies at Aluva he served also as vicar of the filial church at Periyarmugham in the archdiocese of Ernakulam‐Angamaly. After completion of studies at Aluva, Alencherry was appointed as assistant vicar at the Cathedral church of Changanacherry and Director of the Archdiocesan Faith Formation department. Thereafter he served three years as secretary of the Commission for Catechism of the Kerala Catholic Bishops’ Council (KCBC). After his tenure in KCBC he was sent to Paris for higher studies. There he pursued his studies at Sorbonne University and the Catholic Institute from where he obtained his doctorate in biblical theology. On returning to India in 1986, Alencherry was appointed director of the pastoral Oriental Centre (POC) at Palarivattom and deputy secretary of KCBC. He served the Church in Kerala in that capacity until 1993. Simultaneously he had served also as professor at St Thomas Apostolic Seminary, Vadavathoor. He continued to teach at Vadavathoor until 1997. From 1994 to 1996 he was the protosyncellus of the metropolitan of Changanacherry.